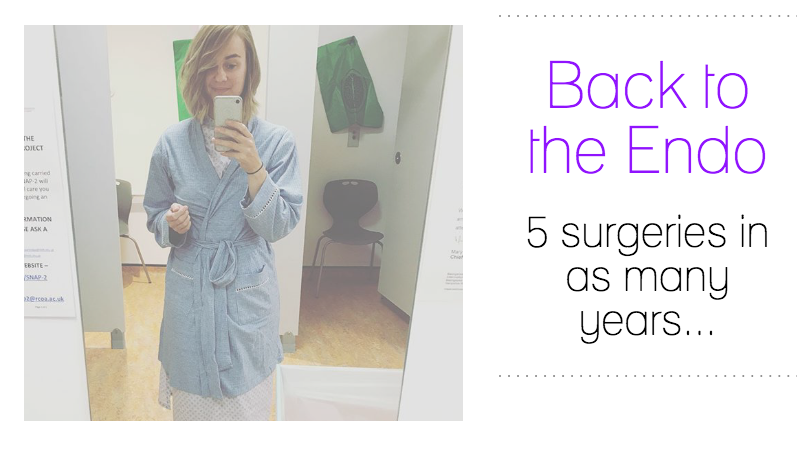 By now, some of you may have seen this Instagram post about me going back for more surgery for my endo. Well I thought I’d give you a little insight into my journey with endometriosis. I’ll discuss the effect it’s had on my health, mental wellbeing and where I am now, 2 weeks post op.

This isn’t intended to be a “Woe Is Me” post. In fact, I want it to be quite the opposite. My story isn’t half as bad as those experienced by some of the endo ladies I have been in contact with over the years.

It certainly isn’t an NHS bash either; my points about my GP and surgeons are merely to highlight the lack of education on this condition that affects 1 in 10 British women. If it wasn’t for our beloved NHS, I’d be a crying, dribbling, miserable mess…!

Let’s take it back, shall we?

If I’m honest, my symptoms of endo started as early as 11 years old (I was an early starter just a year before!). But that was “just heavy, painful periods” which were ‘normal’.

Having lived this way for almost 12 years, I decided enough was enough. I finally complained to my GP about how awful I felt all the time; the constant pain and fatigue, the yo yo weight. She told me I had IBS and that the pain was psychological 😐

“There is no way it’s endometriosis as that’s only bad when you’re on your period, not all the time”

Some women may have severe pain even though they have only a few small areas of #endometriosis.

After multiple second opinions, I was eventually booked in for my first diagnostic surgery in Feb’12. Upon discovering I was “riddled with endometriosis and scar tissue” (the surgeons words!) I was booked in for my second round in May that year to remove it. (Oh to have been a fly on the wall when my GP received THAT letter from the hospital 😂)

Laser Surgery Round Three and the implantation of the Mirena Coil to help level out my oestrogen levels after the mini pill failed (and caused me more issues, including the appearance of “abnormal cells” and an early smear test – what everyone wants to hear at 23 years old…)

It takes an average of 7.5 years to get a diagnosis of #endometriosis in the UK – it shouldn’t. Lets bring that down by raising awareness. pic.twitter.com/1v3csXp68V

It just gets better

I really thought I had beaten it; I changed my diet and had lost weight, two things that are supposed to have an impact on the growth of these demonic cells. And for a while, I was truly pain free! I also seemed to be the only women I knew that had reacted well to the coil (although the word does still make me cringe!)

Touch wood, I’ve never had adverse reactions to mine. But alas my wonder-coil and lifestyle change didn’t work for long. Cue…

Yup, another round of Laser treatment, another coil and more scars to add to my body, albeit tiny ones, but still. This is when they told me that my fertility chances were getting slimmer and that surgery shouldn’t be an option anymore. So I swore off surgery, naturally. I wanted to have children one day so as you do, I listened to this surgeon. You trust their judgement.

And due to the ever so wonderful disregard for people’s well being from my employer at the time, I only had a week to recover off of work. (That included the day surgery, the two days post op you HAVE to have and then the rest to get back to normal.) 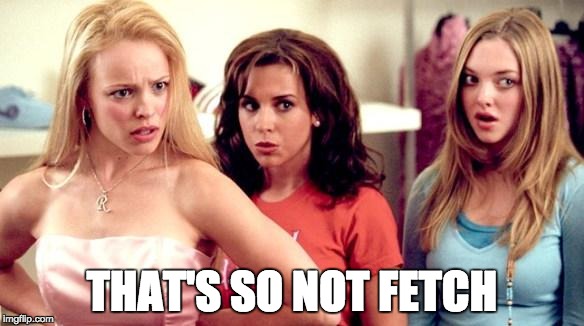 Suffice to say my return to work on the Monday was a shakey one – I had only been able to sit comfortably in car to drive that morning! But you gotta get on with things…

Oh and I wasn’t signed off as the surgeon didn’t see it fit. Say wha…?!

It wasn’t surprising then when around 10 months after that surgery, those pains were back. This time, they felt worse than ever.

The fatigue was the worst I have experienced; almost falling asleep at the wheel, on my lunch break, feeling too weak to cook for myself. The feeling of helplessness was unreal.

The pain evoked violent spasms in my body, anytime, anywhere. Most dangerously again, whilst driving..! Often it’d happen before we went to sleep at night and James could do nothing but cuddle me to soothe the pain, feeling completely helpless as I lay there, sobbing.

I had started to let it make me miserable, like I was giving in to this disease which made me feel even worse. Most noticeably in social situations. I was so used to getting the pain, I almost anticipated it and 9/10 times, I was right. It reared it’s ugly head and I became the boring one sat in the corner whilst others danced away and had fun.

I became well practiced at hiding the fact it was giving me social anxiety. I dreaded being around people, especially when I ‘had to be happy’. Christmas celebrations, birthdays and hen dos for example were the hardest.

Enough was enough, I had to admit defeat and crawl back to my GP…

Referred to my current consultant who turns out to be an Endometriosis specialist. An actual specialist in Basingstoke! After our initial consult, I cried tears of happiness. I finally felt like someone *wanted* to help me and truly could. I shared my doubts about more surgery, citing my withering fertility as my reasoning.

You know what he did? He laughed.

“This is the difference between general gynecologists and those that are specialists in the field.” he said.

After an in depth discussion about anatomy, it totally made sense. Completely and utterly. What I’d been previously told was so wrong. He also told me things about my previous surgeries that hadn’t been explained or even told to me before having looked at my old surgery photos.

This man restored my faith, I trusted him and he understood my position. He even told me what kind of pain I was in without me saying a word! He also promised me that he would perform my surgery and not a member of his team, which is a pretty common occurrence!

Operation time! First surgery of the day (first time for everything 😉), but not before a chat with my surgeon.

“So Franki, any questions about today?”

“Yes; will you be doing my surgery or someone else?”

He put down his notes, pen and looked me square in the eye.

“Of course I am. I promised you no-one but me would”

So off went a happy Franki to the operating theatre.

He came to see me again once I had woken up, had had a peppermint tea, custard cream and felt almost alive..!

He explained not only had I had endo in all the ‘normal’ places, but it was in fact on my bladder and bowel as he had expected from our initial chat (it hurt to pee and even my back pain was attributed to the endo on my bowel) and he had removed it all.

Unlike previous surgeries which lasered it away, he extracted the offending cells to discourage regrowth; kinda like shaving vs. waxing!

As expected, I was feeling pretty battered and bruised for around a week afterwards, had a few issues with my stitches and only stopped walking with a limp after about 8/9 days, but I feel SO MUCH BETTER already.

I’m in a good place and feeling optimistic for the next few months. I’m going to do my best to avoid the triggers too; wheat, dairy and alcohol are the biggest issues as they cause an inflammatory response to hormones so the intake of those will be drastically reduced. So we will see how that helps.

I was signed off for two weeks, which has been a first! But you know what? I needed it. I’ve had time to recover, let my body settle and heal. I feel well and truly rested and ready to return to the office tomorrow.

Although I may have worked the last 4 days of my signed off period from home…a girl gets bored yanno! 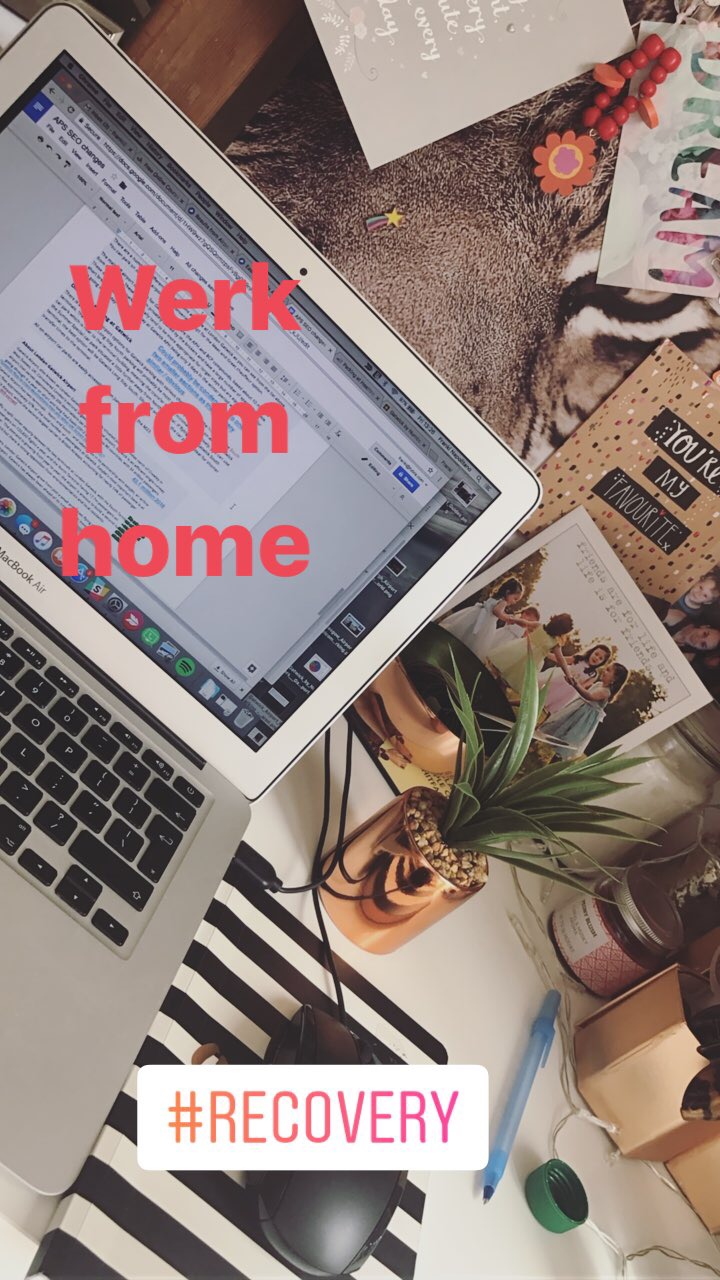 I hope that sharing my journey can shed a bit of light for those that don’t know much about endo and its impact on a women’s life.

There is SO much more I could have told you about, but I didn’t want you to get too bored!

Anyway, I hope this served a purpose 💜

One thought on “Back to the Endo”